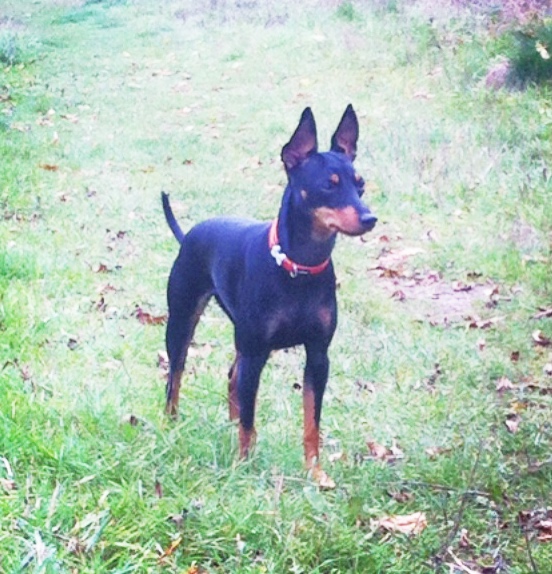 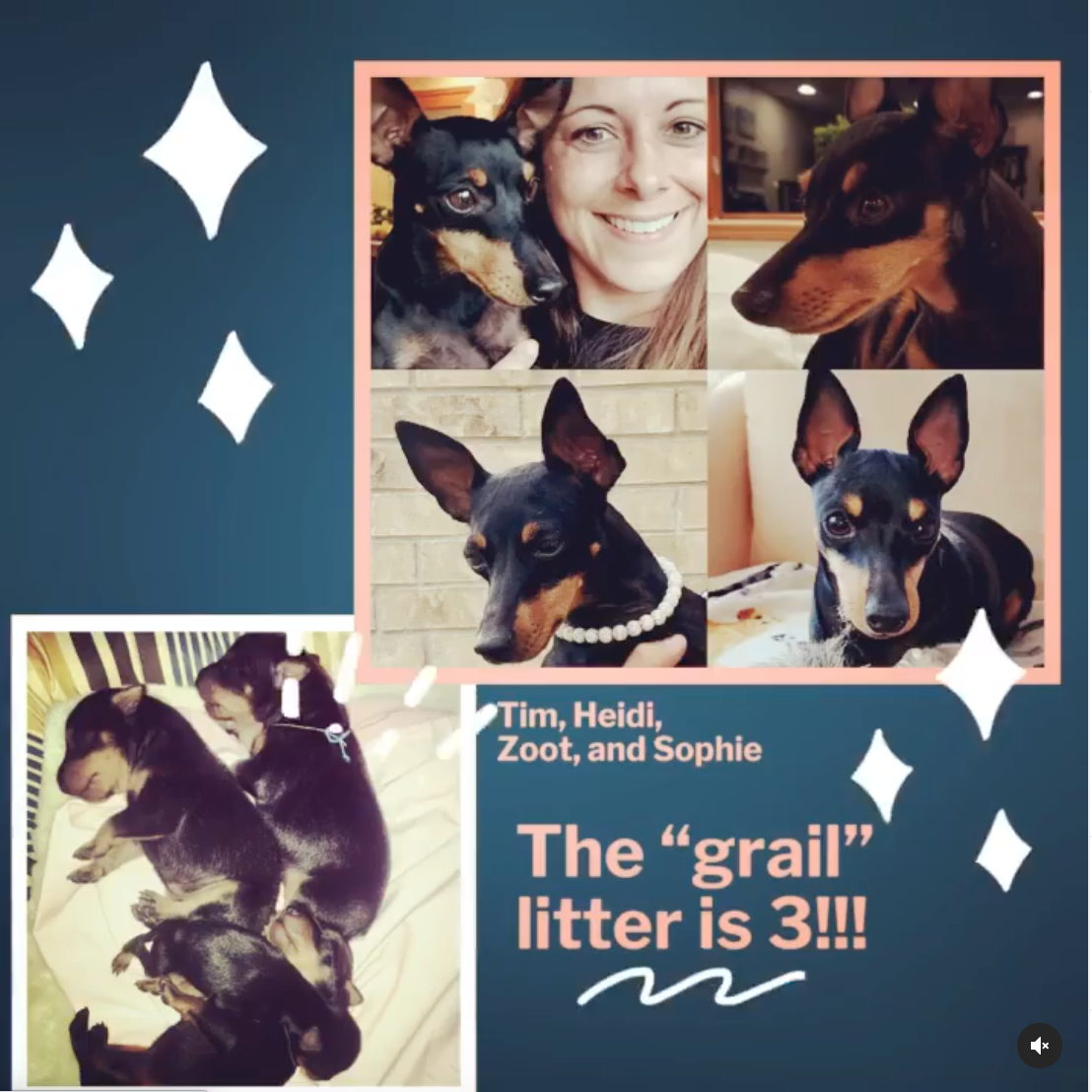 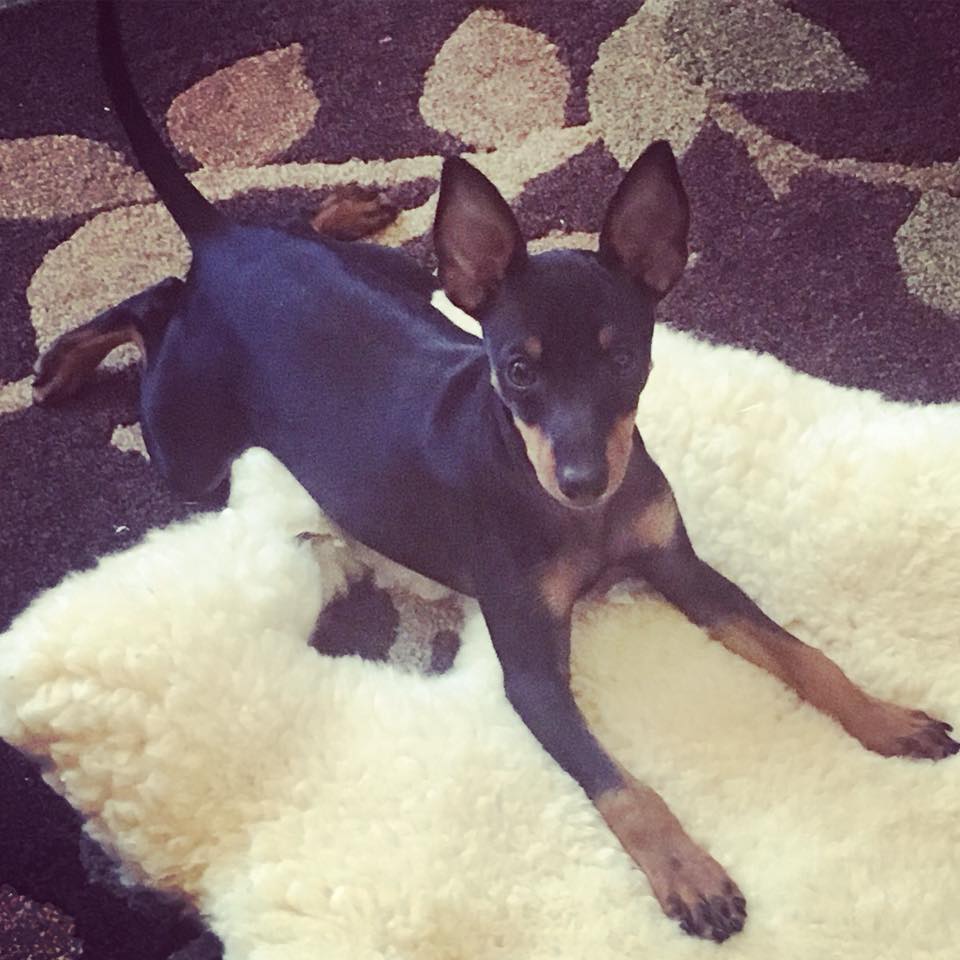 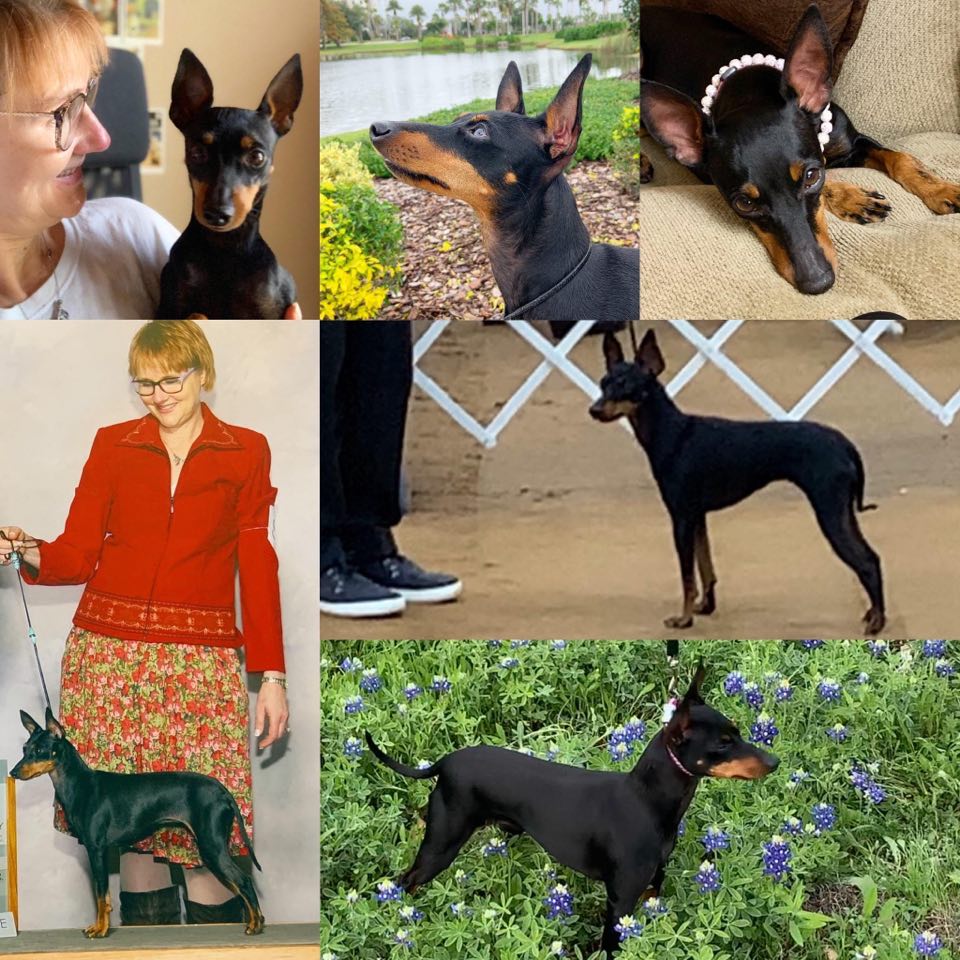 Texangals Theodora "Ted" Logan and Texangals William S Preston Esquire, born May 2018
Ch Maggical Southern Gentleman v GCH Bluebonnet Dreaming Spires at Texangals TKN
"Teddie" is now co-owned with Patricia Hall of Poricias kennel in Pennsylvania,  and nearing the completion of her championship.
"Bill" is in a pet home in Kansas and has a cat as his best friend. 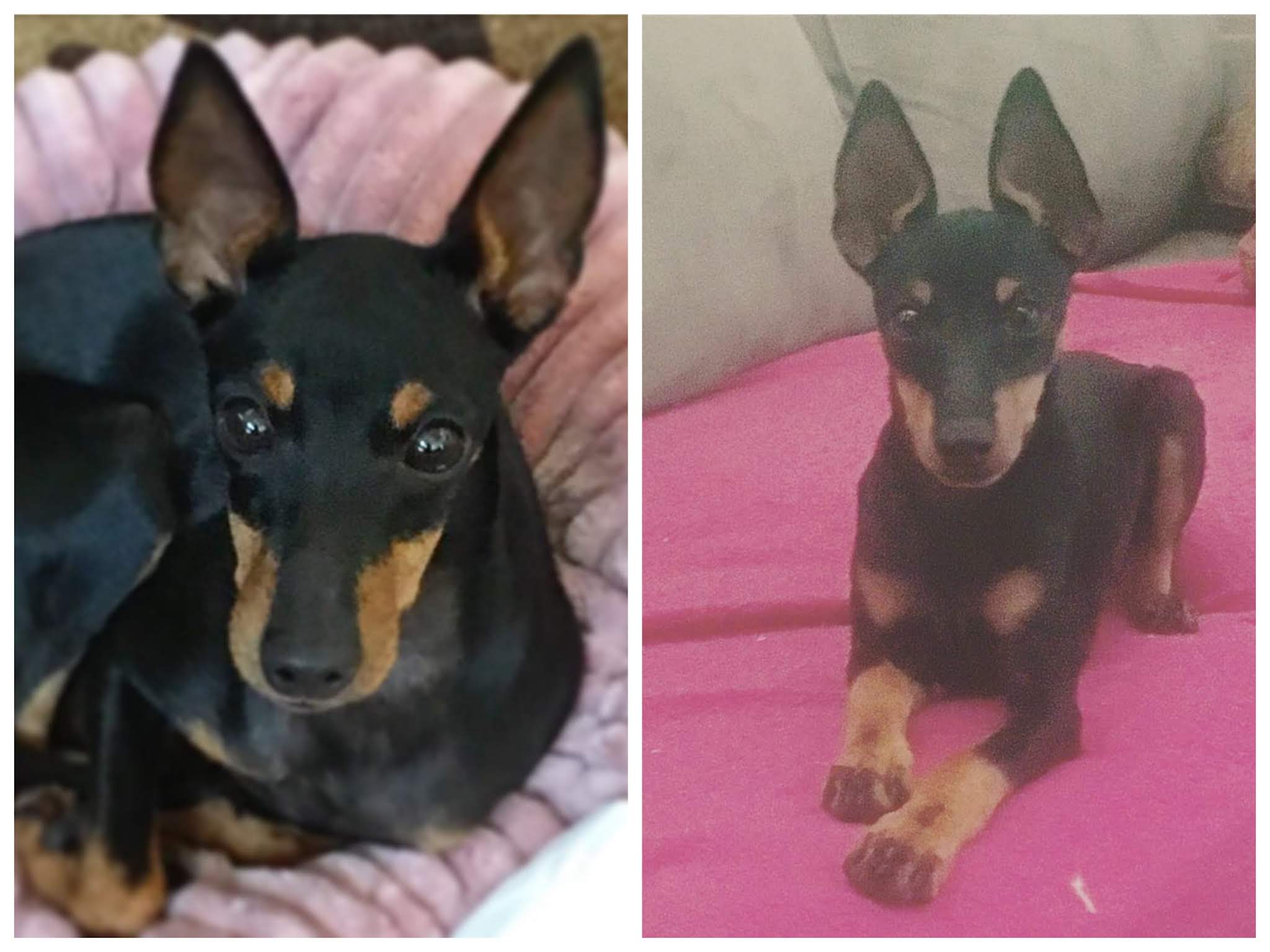 *********************
The Bizarre Adventure Litter, born August 2019
Blackstar Gentleman Jack v GCH Bluebonnet Dreaming Spires at Texangals TKN
Trish, Rohan, Suzy, and Lisa
Lisa has her conformation championship; Trish has her BCAT and TKN; Rohan ("Robbie") is just a few points away from completing his championship; Suzy is an extraordinary ratter - I hope we can get her into barn hunt competitions eventually! 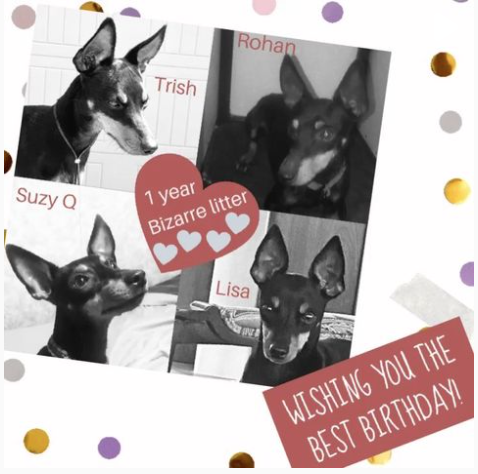 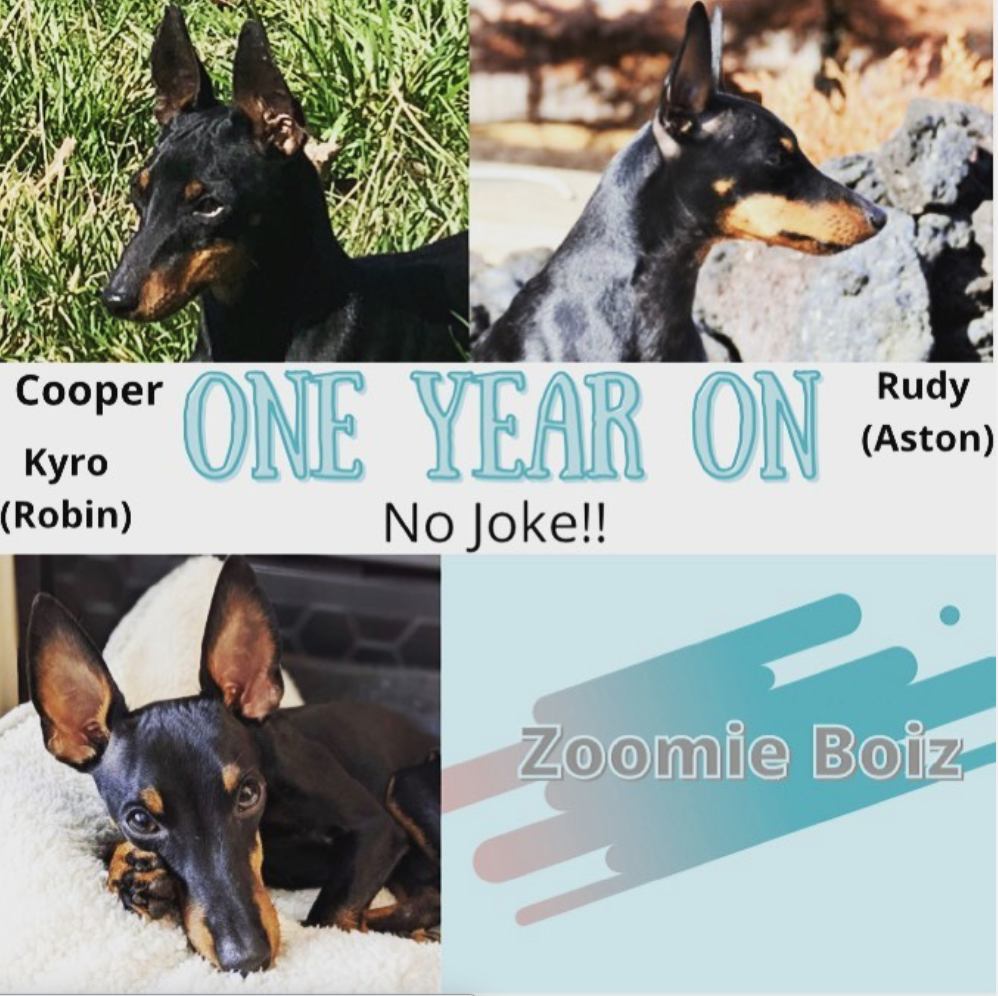 These were our COVID boys - Cooper has been in the show ring some and picked up some ribbons but no points yet, doing his primary duty of emotional support dog for a child with autism; "Kyro" in Wisconsin and "Rudy" in Okloahoma are working on their obedience and trick dog skills
*****************************
Co-bred litter with Poricias, born September 2020
Marler Hill Jumpin' Jack Flash v Texangals Theodora "Ted" Logan
Katie, Flicka, Bumble, Alfie (pictured); Busy Bee will be entering the ring soon; Polly is on cuddle duties 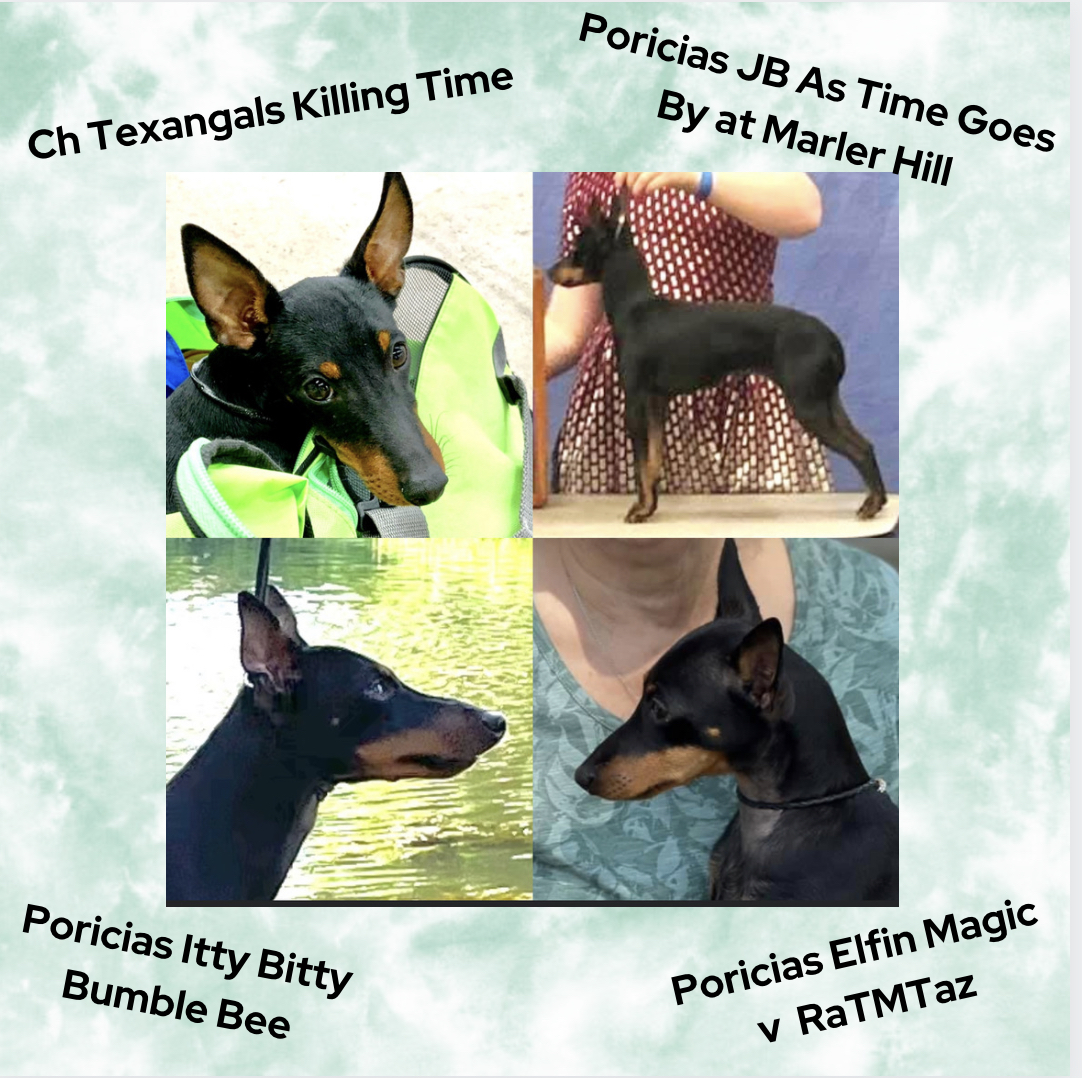 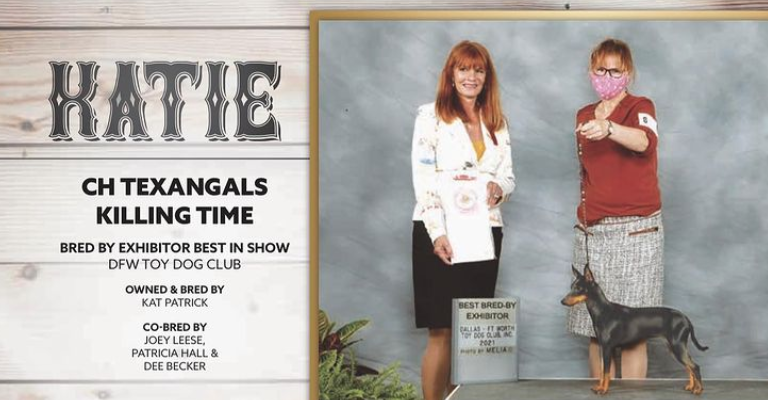 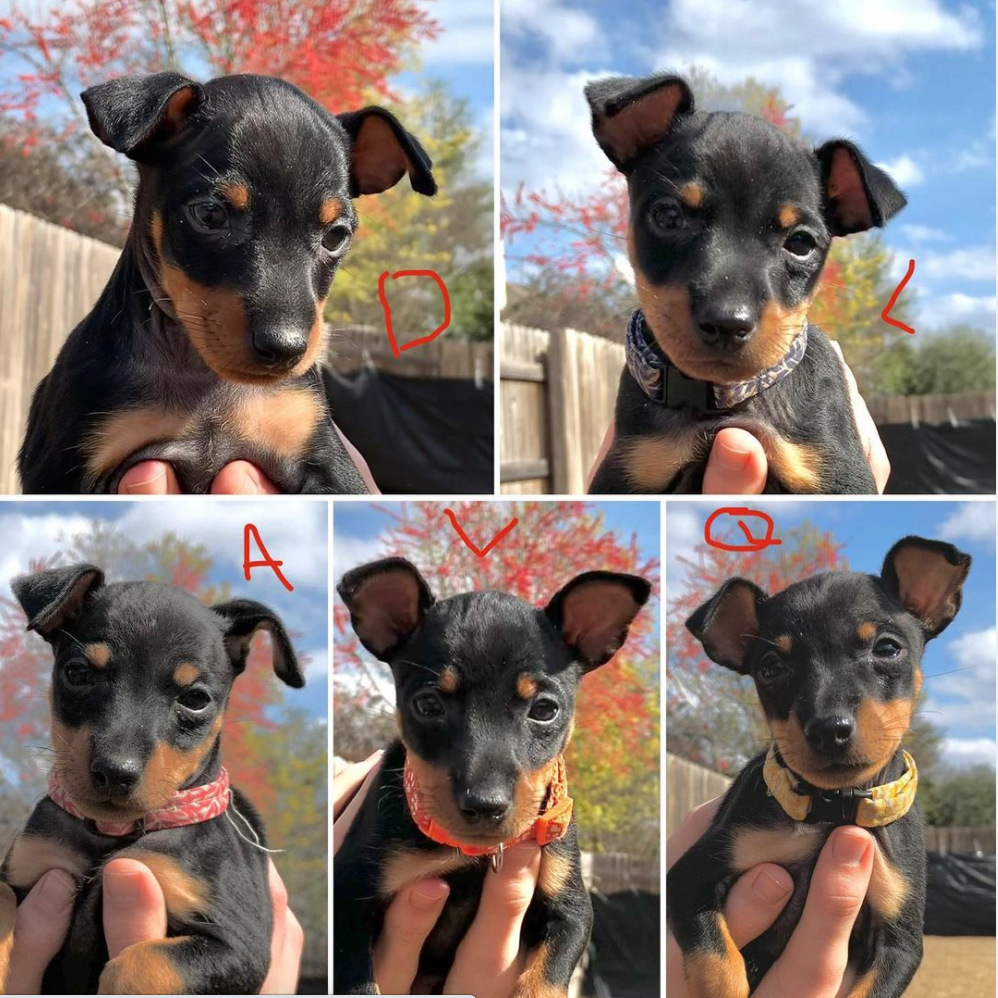 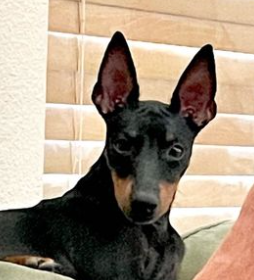 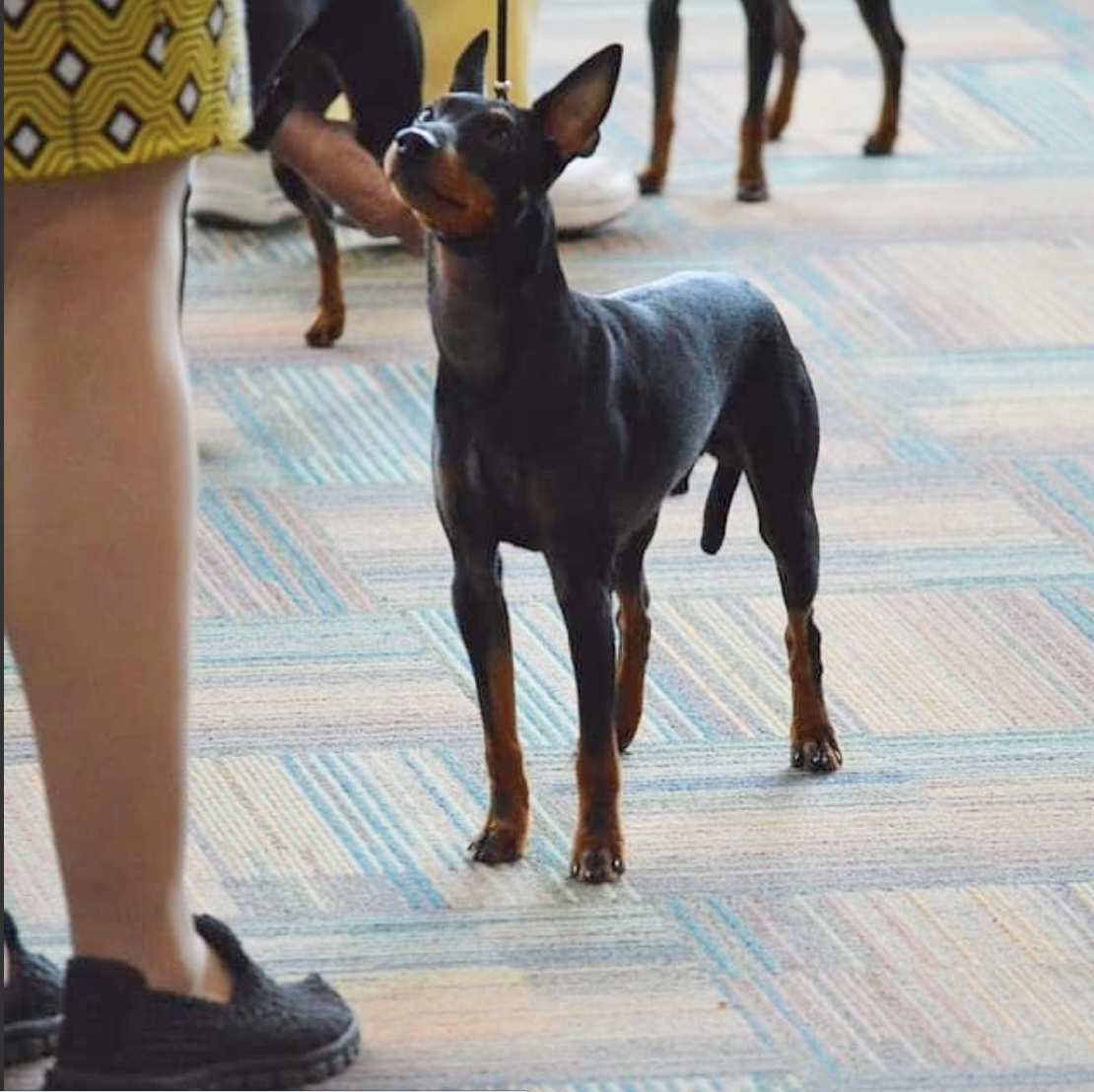 Diego achieved championship status at the age of 6 months, accruing all his points in his first five shows. By the age of 9 months, he had completed his grand championship.
******************
The Spin Doctors Litter, July 2021
Texangals Rohan Heavens Door v Ch Texangals Zoot Just Zoot
Lois Lane and Jimmy Olsen 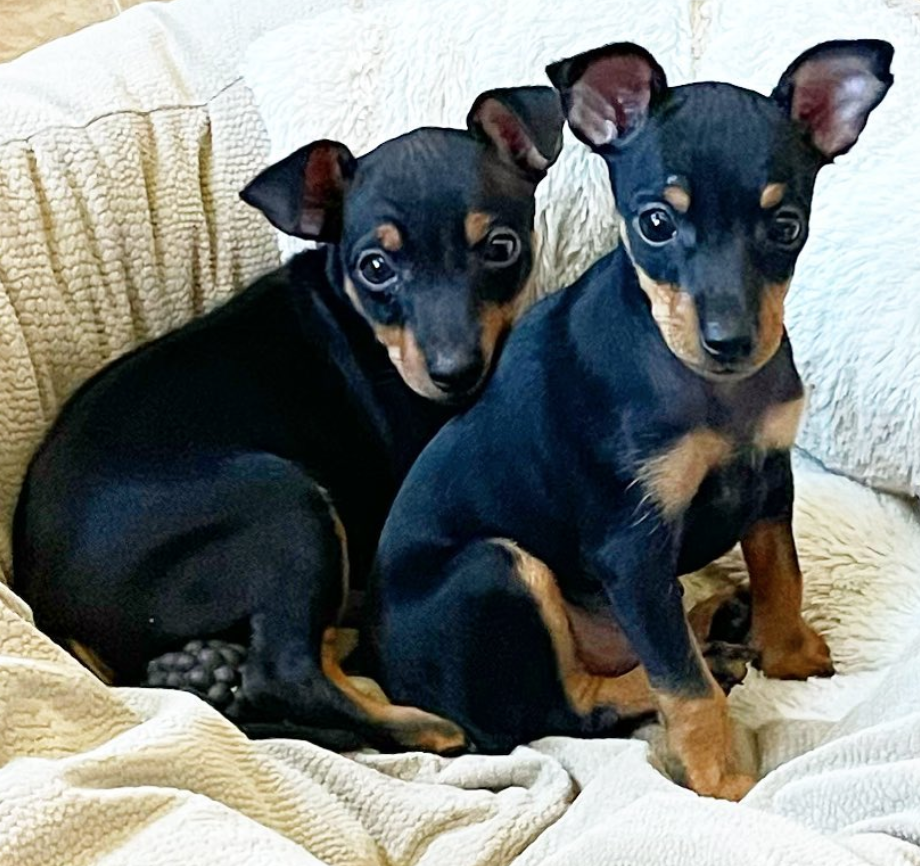 Jimmy and Lois are now Winston and Lucy 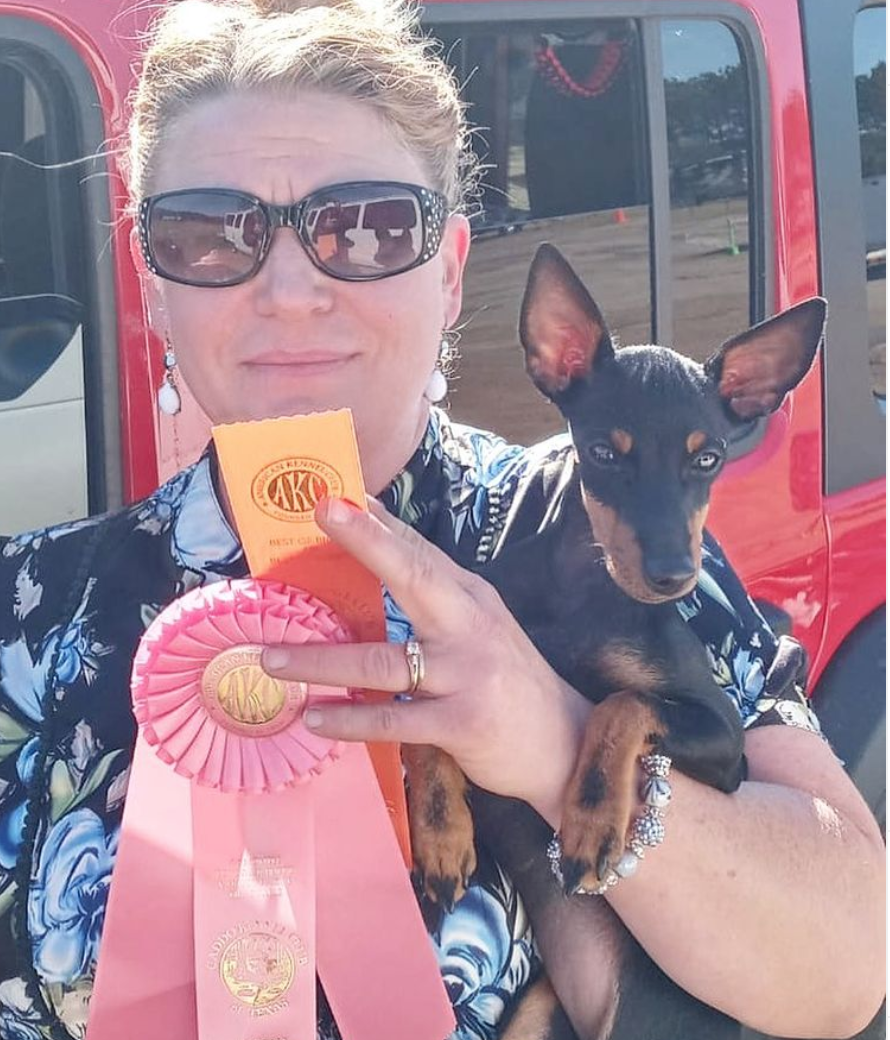 Lucy had her first minor puppy show in Marshall Nov 2021 and won Beginner Puppy Group 1
*******************
The Carpe Diem Litter, born October 2021
GCH Texangals Diego's Got His Knives Out v GCH Bluebonnet Dreaming Spires at Texangals TKN
"DJ"
What can I say? He's four weeks old. We have big plans for him at Texangals so you'll just have to watch this space! 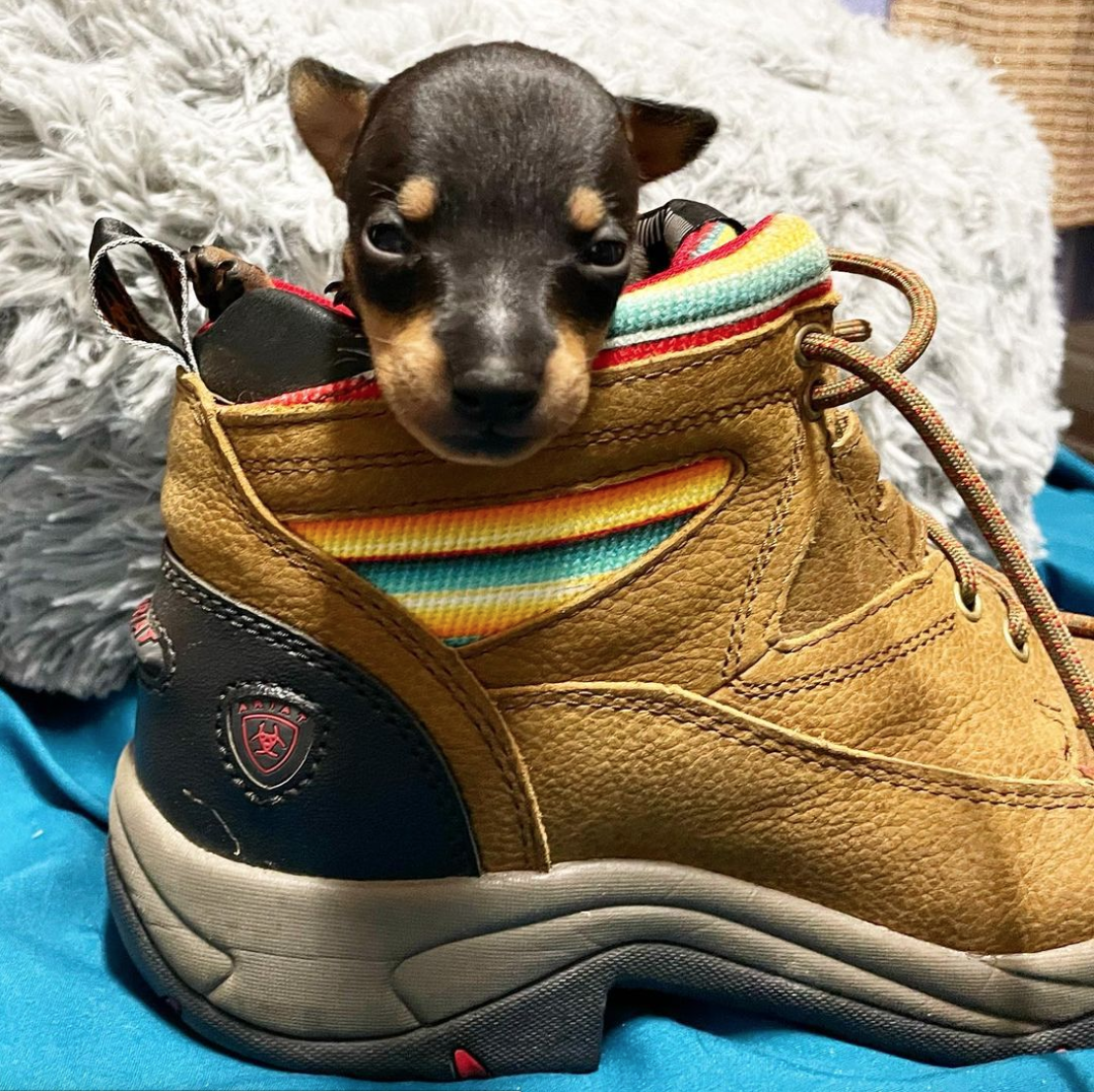 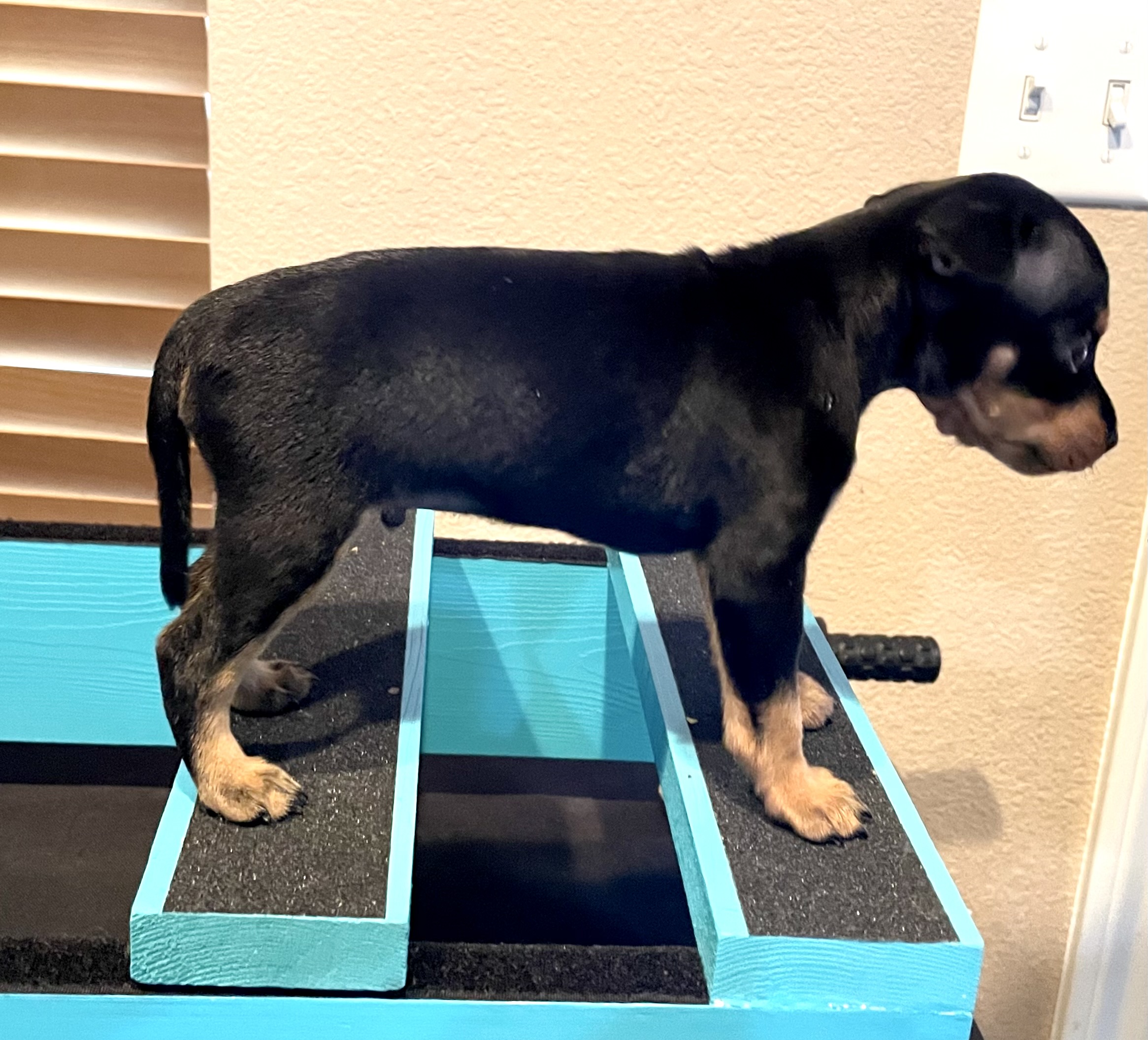 Bonnie in the Buttercups We're expecting puppies at the end of this month at Texangals in Central Texas. The dam is "Bonnie" (Ch Bluebonnet Dreaming Spires at Texangals), currently #13 TMT in the country, and the sire is "Bentley" (GCH CH Dream Maker's One Sweet Ride At Jhen TKN) who is #7 in breed and #1 in TMT Owner Handler. Bentley  Bonnie with her Boy in Junior Showmanship Bonnie is a 3/4 English bitch imported in 2016 who goes back to Amalek lines with Maggical/Rosewood TMT. Bentley also goes back to the English Reeberrich kennel via Velvet Firefly where his lines connect up with Bonnie's. For those of you who don't really care about lineage, the bottom line is that they're very well bred, they are bred with a number of international influences, and as far as temperament, get along well with other dogs, other types of dogs, and children. A number of dogs in Bonnie's line back in England are Pets as Therapy dogs, visit
Post a Comment
Read more

Introducing our "Bizarre" litter: Rohan, Trish, Lisa-Lisa, and Suzi Q, named after our family's favorite anime show, Jo-Jo's Bizarre Adventure. Our 3-ounce diddy Lisa-Lisa alongside Rohan and Suzi Q Like most popular culture, particularly films or comic-type stories, we had a lot more boys' names lined up than girls, but are thrilled to pieces that we have 3 girls and one boy from the breadth we get from the stud dog's line and its St Lazar influence. The puppies arrived in the early hours of Sunday, at least four days earlier than expected, but being (mostly) larger than any of the mama's previous pups, we're assuming she had ovulated earlier in the week than we'd thought, and probably just caught the end of her fertile period when we bred her the day of her progesterone test. Phew! That was a close call, then! Mama and babies are doing well, but the up-shot of this is that I'll be having puppies looking for homes in about 8 weeks
Post a Comment
Read more

In mid-December every year, one of the biggest dog shows in the country takes place in Orlando. It's called the Royal Canin show, but even though it's only a weekend show, the whole week before is full of smaller shows at the same venue, including the Manchester Terrier specialty where large numbers of our breed turned up. The event is tiring and requires some stamina, but we also enjoy ourselves at night, going to restaurants or bars or even doughnut shops at 10:30 pm! I do wish we'd come away with more ribbons than the 2nd and 2 x 4ths, but it was an event not to be missed, a chance to meet people you've only ever heard of or seen on Facebook, and to see a large number of dogs to compare toplines, movement, head shapes, and all kinds of things that are hard to appreciate until you see a big group of them, side by side. The weather in Florida in December is a lovely change from dreary, cold winter, though there was more than once than I got caught i
Post a Comment
Read more