Texas is Becoming a TMT Hub

February 18, 2019
The past six months or so has seen a resurgence of interest in the breed in the great state of Texas.

Whereas I spent most of the early part of 2017 on my own in the show ring, we've seen as many as nine at a single show, and more puppies are coming of age every month.

I really should make an effort at the next one to photograph us all together.

The top moment so far has been my foundation bitch's second "major" at the recent Austin area show. This means that she has jumped a big hurdle on her way to a championship. As of writing this, she needs five more points, and hopefully, with Navasota, Crosby, Kerrville, Rosenberg, and possibly a one-day appearance at Ft Worth, I think the likelihood of her success is pretty high. 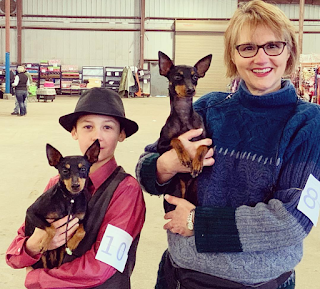 Bonnie and Zoot celebrate Winner and Runner-Up at Austin

One of the best parts of having more people at the shows is the community we're building up: everyone is friendly and supportive, and we're making the effort to populate the same shows so that we get significant and useful numbers all in one place.

If you want to know more about Toy Manchesters or even jump onto the ground floor of an up-and-coming group of dedicated and motivated owner-handlers, then get in touch. We can hook you up with one of these lovelies of your own!