Like most popular culture, particularly films or comic-type stories, we had a lot more boys' names lined up than girls, but are thrilled to pieces that we have 3 girls and one boy from the breadth we get from the stud dog's line and its St Lazar influence.

The puppies arrived in the early hours of Sunday, at least four days earlier than expected, but being (mostly) larger than any of the mama's previous pups, we're assuming she had ovulated earlier in the week than we'd thought, and probably just caught the end of her fertile period when we bred her the day of her progesterone test.

Phew! That was a close call, then!

Mama and babies are doing well, but the up-shot of this is that I'll be having puppies looking for homes in about 8 weeks, so fill in one of my puppy applications to be considered for one of them. 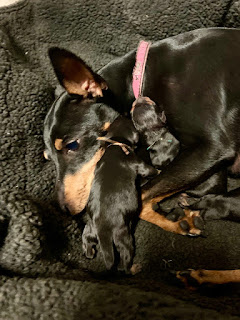