What We've Been Up To During COVID

Ahhhh, COVID time. The spring and summer that basically never was. We didn't completely rest on our laurels, though: we had a litter of puppies, grabbed a couple of trick dog titles, and just this past weekend, we attended our first show since March and brought home a couple of landmarks.

First, let's talk about the puppies: Cooper, Aston, and Robin were born on April Fool's Day to our foundation bitch, Bonnie, and the number one OH TMT in the country, Bentley.

There are a couple of other posts about this, so I won't dwell on it too long: suffice to say, Robin (now called Kyro Jett on Instagram) has gone up to his outdoorsy family in Minnesota where he spends a lot of time in a lifejacket on a boat!; Aston (now called Rudy) is the apple of his owners' eyes in the Oklahoma City area; and Cooper (unofficially nicknamed Dennis the Menace) has gone to live with his grandsire's breeder in Kentucky where he helpfully inspects fences to let Barbie know where there are any gaps that other TMTs might escape through, and watches her waistline for her by eating the cobbler on the table if she turns her back for literally one second.

Those three "zoomie boiz" - named after cars as an homage to their British mama and their car-named sire - were definitely most of the fun for the summer, but we kept busy in other ways, too. AKC offered video evaluation of tricks for trick-dog titles, and both Bonnie and Trish were awarded the novice level.

Finally, this past weekend saw our return to the ring with not just our three girls Bonnie, Zoot, and Trish, but Trish's littermate who was loaned to us while her owner was busy at home with a couple of litters of puppies of his own.

It was no surprise that everyone was very rusty having been away from the ring for a long time, but the consummate-showgirl, unruffled matron took home the BOV both days plus 3-point majors which make her over halfway to achieving her grand championship.

On top of that, my son (whom we call Timmy on social media) took the top prize in Novice Intermediate junior showmanship, putting him over the limit needed to move up to the Open class, which he competed in the following day and took 3rd out of a field of 8. 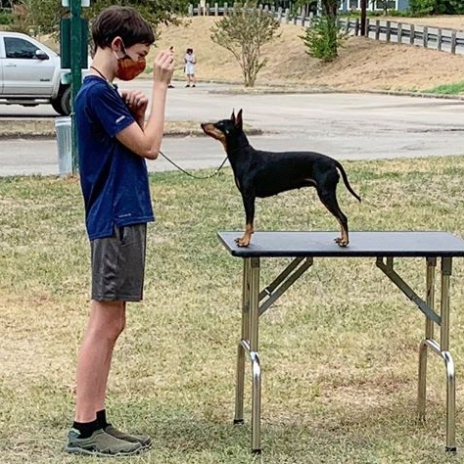 Many thanks to Jo Lynne and the rest of the Tuesday show practice group that meets in Austin for their help with ringcraft and helping do a bit of socializing of dogs that had been cooped up for months. One day, I hope to be sharing margaritas and nachos at El Mercado with them again!

Between now and October, there is a slew of shows coming up in our area, so we'll see how we get on as more of the TMT community is coming out of COVID quarantine: sounds like there will be 7 in the ring at Belton at the end of the month (including 3 littermates: Trish, Lisa, and their brother Rohan).